A Room of His Own

Twenty-five years ago I and another good friend, Donelo, found ourselves dating two women who also were good friends with each other. We became a constant foursome. In the course of one group conversation Donelo said something surprisingly sensitive. As the two women rose to leave the room, both commented approvingly on the modern masculinity Donelo had demonstrated. When the women were out of earshot, Donelo half-mumbled “I hate Phil Donohue”.

I don’t remember what Donelo had said that was so notably sensitive, or the topic of conversation from which it precipitated. And, as intense as our foursome had once been, like most friendships, ours were not maintained through the years.

But back to our current friend, the friend who is also a friend of Phil Donohue. We were invited to a local showing of a new film produced by Phil Donohue, Body of War. The film depicts the struggles of a young disabled vet and his anti-war views. We were unable to attend the showing and thus missed our chance to meet Phil Donohue.

The invitation, however, had stirred our latent animosity which we had never been aware of. It took me back to the long abandoned foursome and Donelo’s remark, which I had not given much thought to at the time. But I am now unsure if Donelo made this remark to me for effect, or if, as often happens, he had unintentionally articulated a passing thought which reflected (and possibly transferred) his own animosity toward Phil Donohue.

Of course this posting is not a rant against Phil Donohue. In fact it has little to do with Phil Donohue. But at one time, now passed, and under a set of social-political circumstances, now passing, an experiment in cultural engineering was undertaken in which masculinity would be redefined, mostly with little participation of men who would eventually be required to live the new definition. Phil Donohue didn’t start this experiment, but given his personality, his popularity, and his time slot, he became the best representation of what men could be. The 1980’s were a very flexible container that not only held Phil Donohue but also his antithesis, Andrew Dice Clay. Clay created a persona in the Diceman in which he could say the things that no reconstructed man at the time could say, or at the very least, could laugh at in the company of women. More importantly, the Diceman outraged those who believed in the possibility of the great gender experiment. He was eventually banned from the MTV Music Awards show, and his appearance on Saturday Night Live was boycotted by musical guest Sinead O’Connor and cast member Nora Dunn.

The Gospel of John describes Jesus brought bound and scourged before the people of Jersualem by Pontius Pilate. According to John, to dramatize the difference between what some had hoped Jesus could be and the human who could be accountable to Roman law, Pontius Pilate introduced Jesus to the crowd with the Latin words “Ecce Homo”: Behold the man.

Andrew Clay’s Diceman persona was criticized for what many considered sexism and misogyny. Perhaps Clay was presenting someone to the crowd who didn’t fit with their expectations either. 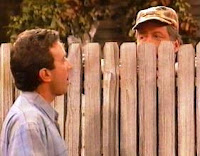 In the Newtonian laws of culture, each action creates an equal an opposite reaction. The Diceman was masculinity in extreme, which was the only way it could have been portrayed at that time, and under those circumstances. From the averaging of Donohue and the Diceman came Tim Allen, whose Tim “The Tool Man” character arose from his stand-up act to
mount the sitcom stage in “Home Improvement”. Allen’s portrayal of masculinity was much more palatable. He worked through his own questions of identity, fumbling with what it meant to be a husband and a father, often in the safety of his workshop, the garage, or at the end of each episode, over the backyard fence with the older, wiser neighbor, Wilson Wilson, Jr.

James Twitchell, the author of Adcult , turned his attention in 2006 to the subject of men and their spaces. “Where Men Hide” was inspired by Twitchell’s male friends who were curious about the layout and furnishings of the “spider hole” which was Saddam Hussein’s final hiding place. Twitchell postulates that man-spaces play an important role in lives of men because they provide a place where men can work through their masculine identity in the more accepting company of other men. According to Twitchell, the loss of traditional male spaces, such as fraternal lodges, has created a shortage of opportunities for men to do this.

Our apologies and reassurances must be given. Readers of this post are surely thinking “Tito, this all may be interesting, and to be honest we’re not sure that it is, but what does this have to do with marketing, and the promise of marketmambo to report on the action at the edge of the marketing dance floor?” Let us close in on that point.

Recent surveys of architects and contractors reveal a new trend in home construction and remodeling. Gone from the top of the list of most requested amenities are the master bedroom suite and the grand entrance, now replaced by the dedicated media room and the home office. Perhaps modern masculinity will make its stand not in the lodge or the workshop but in front of the television, in the tradition of Al Bundy, who sought refuge from his family and job in front of his TV, but only found further frustrations.

Geeks to the Rescue

Apparently this trend has not been lost on the electronics retailer, BestBuy, and their services subsidiary the Geek Squad. The Geek Squad recently rode to the rescue of their male customers to aid them through the release of the movie version of Sex in the City. Understanding that men would be put into peril as they negotiated the movie, their reactions, and the women in their lives, the Geek Squad created a survival kit. In one component of this kit, Geek Squad representative take their video cameras on the tour of important locations which are frequented by the women of Sex in the City. The Geeks tell men that they’ve done this “so you don’t have to”. The video of this Geek tour is embedded below.

Representatives of the Geek Squad handed brochures to men on the street which included a cheat sheet of the female characters and their issues. 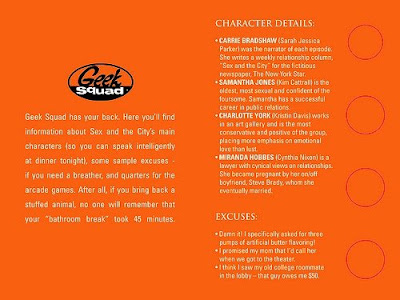 The brochure also included four quarters so that men who accompanied their women to the movie could sneak out to the lobby for a try at a video game or two.

Boston Legal is a comedy-drama that makes up with critical acclaim what it lacks in breadth of audience. It also has the highest ratings of any show among highly affluent 25 to 44 year old viewers. BL is the creation of David E. Kelly, who unashamedly uses the show as a platform for his political and personal opinions and musings.

The first 56 minutes of each episode are entertaining but mostly irrelevant to this posting. The last four minutes of each episode are devoted to a conversation between the two male lead lawyers, who is in his late forties and Denny Crane, who is approaching seventy. David Kelly allows these characters to spend their four minutes discussing life, politics and women on the balcony of the law office, accompanied by scotch and cigars. Alan and Denny also discuss their love for each other, refer to themselves as flamingos, and have sleepovers. In our opinion it is the best written four minutes on television.

Unfortunately, days after the last episode of this season, Kelly announced that he is leaving the studio that produces the show. We can only speculate as to how this will change Boston Legal.

But an interesting phenomenon accompanies the show. When male fans of BL find each other they quickly turn to a discussion of the relationship between the two men, and the depiction of men acting not as others would like them to act or as comic caricatures or as andro-apologistas, but simply as men. Unfortunately most marketers and creators of popular culture don’t share Kelly’s sensibilities.

For those who are unfamiliar with the show, we’ve embedded a video that compiles several of the scenes from the balcony. It’s a bit long so sample as much as you like.

It is often said that the first work of western literature, The Iliad, is the story of a fight over a woman, Helen of Troy. Beyond that mechanical device, it also is a study of men seeking immortality through the attainment of honor. The second book of western literature, The Odyssey, is sometimes dismissed as a fanciful adventure tale. But it is also the story of Odysseus’ return from the Trojan War to his kingdom to resume his role as the caretaker of his parents, the father of his son Telemachus, and by banishing her suitors from his household, the undoubted husband of Penelope.

So today we celebrate the parent, satisfied with a feast of steak, uncorsaged, unbrunched, uncelebrated by long distance calls, who pushed you higher on the swing until you shrieked, urged you higher up the tree until your mother shrieked, and offered the sanctuary of a lap during the scariest scenes. He would sacrifice his kingdom to do this all once again.

To see the trailer for Phil Donohue's Body of War, click here.

For the Amazon link to Twitchell's Where Men Hide, click here.

From the averaging of Donahue and the Diceman we end up with a version of the American male who is less sure of himself than ever. He's probably watching his moves more carefully than he'd like, and he's likely nostalgic for a time when choices and role models were less complicated.

It's interesting to note that, during the recent Democratic primaries in Ohio, Pennsylvania and West Virginia many of these fellers cast their vote for a woman.

A phan of Phil's