Ah, so soon Tio Tito? The clock has not yet run its full course, let alone the calendar page. But who can tell when the muse will sing, and when the goddess who unspools the thread will allow a length for such things?

Several months ago we wrote a post (The Ties That Blind) that expressed our muddled thoughts on the sometimes false feeling of interpersonal connection we get from technology and how it may distract us from the more authentic item.

We’ve recently become intrigued by a play that is moving across the country in a path seemingly designed to avoid our location. We’ve so far only been able to savor samples from afar.

The play is entitled “Continuous City” and is a production of the Builders Association, a New York based theatre company whose recent productions have explored the human implications of technology.

Continuous City is the story of two men trying to launch a social networking service, Xubu, that allows its users to record short video greetings for friends and family that they may otherwise not see in person. Both men travel the world trying to build Xubu and maintain their personal relationships at the same time. 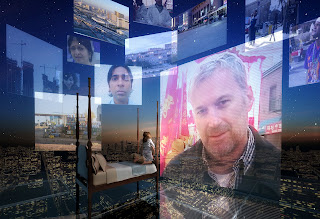 The play is staged so that large video screens dominate the set, leaving the actor on stage to play opposite a character present only through technology. One of the men, a father, uses technology to have lunch with his daughter, each present by webcam, but otherwise on opposite sides of the world. When the lunch ends, the daughter hits a button on her key board, and the image of her father disappears. 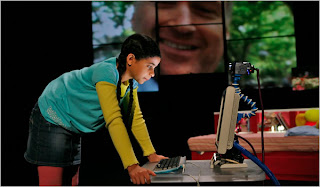 Xubu is in reality an existing service. We’ve included a link for anyone interested in learning more or creating their own greeting. Some of the greetings are incorporated into the video montage of the stage, and perhaps yours will be one of them.

We at marketmambo often rely on technology to maintain our connections with our friends and colleagues, who we so appreciate for their indulgence of our delusions, for their patience with our mania. As we enter the holiday season, we look forward to our next coffee together, our next meal, our next beer, or possibly joining together for the next great battle, for the time we spend in battle is the time we value the most. Until then, draw strength from the possibilities of the season.

For the website of the production including tour schedule, click here.
For articles on the play, click here, here, or here.
And for Xubu, here.
Posted by Phil Klafta at Wednesday, November 26, 2008