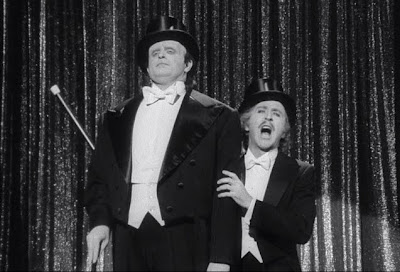 Dear readers, today we offer you a special treat: a post not written by your Tio Tito.

The Mambo diaspora spreads far, and one can never be sure that there is not a Mambo next to you in a bar, at a fish fry, or at the library at the University of Wisconsin at Madison. You see we have a cousin in that snow-bound state, Davido, with whom we have often shaken both head and fist at the industry in which we once toiled. He is now preparing himself to teach the arts that he once practiced.

The business of advertising has fallen from the high perch it once occupied. Unfortunately few inside the industry ever realized or acknowledged how precarious that perch had been for the past two decades.

For those of you who don't follow these matters...lucky you...many advertising agencies spun off the media planning and buying discipline that once once part of the many services they offered their clients. The idea was to create larger media companies that could get better prices from newspapers and networks through their increased buying power. You see, ad agencies had always considered media the unskilled labor of the ad world, basically a commodity that could only be better by being cheaper. As the complexity of media has increased, so has the power of these new media giants, but at the expense of the ad agencies of which they were once a part.

And Davido has recently written a post on his blog, Kerfuffle, about the role of media skills in the careers of today's advertising students and tomorrow's leaders. But what he has really written about is the recent past and immediate future of the advertising business. It's a story with underlying themes of money and arrogance, fate punishing vanity, and the ultimate triumph of the creation over the creator.

Don’t look now, but the media people are taking over the advertising business. (post link)

It would seem, based on popular culture, that the advertising business is all about the creative. Indeed, as noted in a post [on Mediated Communication, the J-school blog] earlier this week, over 100 million people tuned into the Super Bowl, as much for the ads as for the game. Consider one of the most-mentioned things about those Super Bowl ads: the price. Was it worth $3 million for one of those :30 ads? Hard to say; that would depend on the advertiser’s media strategy.

Three times in the past two weeks I have been approached by undergraduate students in the J-School who said they hoped to land a job as advertising media planners. As one who spent a few decades as a media planner, I couldn’t be happier. For too long, it seemed media was next to no one’s preferred ad agency job. For whatever reason, media planning — the mix of art and science that guides the strategic deployment of advertising dollars –still seems to be overlooked or flat out dismissed by young people looking to enter the advertising business. And yet, in the 21st Century advertising industry, it’s not the creative product that gets all the attention from clients.

Clients care most about making their money work as hard as possible. How hard that money works is closely tied to the media strategy, which is why these days the media strategy informs the creative strategy instead of the other way around. Broad-based, mass reach media is rapidly becoming a wasteful marketing luxury, and simply shoveling a budget in the direction of the television networks doesn’t cut it anymore. Media plans are far more targeted, measurable, transactional, experiential and flexible. Advertising is about changing behavior, and nearly all behavior is circumstantial to some degree. It’s the job of the media strategist to find the optimal circumstances to try to change that behavior. The best ad in the world won’t sell a damn thing if it isn’t exposed to the right person at the right time in the right circumstances, whatever those may be.

Given the increasing importance of media strategy and its precise execution, it’s no surprise that media agencies are growing and diversifying while traditional advertising agencies are withering. Client relationships with media agencies are more stable than relationships with their creative counterparts. Creative assignments may be divvied up among several shops, but media planning and buying tends to be consolidated with viable long term partners. To the entry-level advertising job seeker, this should make media strategy and execution a whole lot more appealing, especially since that’s also where the job growth seems to be.

Core media planning and buying functions — what the old agency model lumped into the “media department” — are only one part of the today’s media agency model. Specialty media agencies have emerged to handle a wide variety of client media needs, often at the expense of traditional creative agencies. A look at Omnicom’s OMD Media network provides a good example. Among OMD’s strategic business units are agencies that specialize in sports marketing, entertainment marketing, digital direct marketing, branded entertainment, programming and content creation, and search marketing to name a few. These are media agencies that lead the development and implementation of media-driven ideas, sourcing and managing ancillary support elements (like creative) along the way. Clients have come to realize that while it may be fun to make TV commercials, the vast majority of their marketing dollars are spent on media, not creative. Clients are focused on the money.

If I had my way — which I don’t… yet — I would like to see our J447 course, Strategic Media Planning, be required of all students who wish to major in advertising. Since it’s not, I can only suggest most enthusiastically that if you are an undergraduate, and you think you want to work in the advertising business, be sure to take J447 and learn as much as you can about media strategy. Don’t stop there. Read the media trade publications and web sites. Develop opinions about media campaigns you admire. Know what goes into a good media plan, and be able to identify media strategies that miss the mark. Recognize that nearly anything can be a media opportunity… and not just by slapping an unsightly ad on it. Be knowledgeable about industry leaders and innovators.

In today’s world of rapidly converging media channels, user-generated content, and multi-platform entertainment options, creative is no longer the undisputed king of the advertising hill. Clients have limited marketing resources and great expectations. They place a very high value on feeling confident they are spending their advertising money wisely and effectively. And that money is entrusted to the media strategists.

[Originally posted on Mediated Communication, the blog of the School of Journalism and Mass Communication at the University of Wisconsin at Madison.]
Posted by Phil Klafta at Monday, February 15, 2010