The Roar of the Unseen Crowd

Like many households this Sunday, the Mambos will be spending much of it enjoying the Super Bowl. What is special for us this year is that the game will be held in our backyard, almost literally. We may not have the money or the connections to attend the game in person, but when traffic is light on 275, and the wind blows just right, the roar of the unseen crowd will swell from the horizon, much like waves on the bay. To be sure, we've never heard the bay from our backyard, regardless of the direction of the wind, but we have our hopes for the game, and if our hopes fail, our imagination will jump into service.

We will be serving a new dish for the game, one that the whole family is eager to try. We found the recipe on the internet. It's called the Bacon Explosion, and it's two pounds of sausage wrapped in a woven mat of two pounds of bacon, all smothered in barbeque sauce. The recipe calls for cooking in a smoker, but we'll be making use of the Weber Kettle. 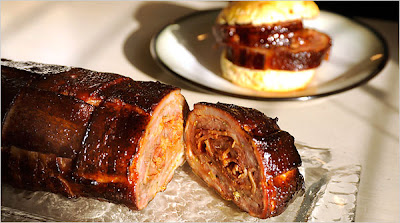 We found the recipe for the Bacon Explosion on a website called BBQAddicts.com, though we were lead there after seeing the recipe mentioned on several other sites, and followed a link back to the original source. The recipe is the creation of three men who form the Burnt Finger BBQ barbecue team.

It seems that one of the men on the Burnt Finger team, Aaron Chronister, is by profession an internet marketer. He wanted to increase visits to their site to increase advertising revenue to further support their barbecue team's activities. He began the campaign to bring the Bacon Explosion to the masses by sending a Tweet to his 1200 followers on Twitter, each of whom had followers of their own. Mr. Chronister also made use of sites such as Digg and Del.icio.us, but believes that his greatest success came from his use of StumbleUpon. At StumbleUpon, users can enter information about their professional interests or hobbies, and SU serves up relevant sites.

According to the statistics, almost 400,000 visitors have, like we have, found their way back to the original recipe at BBQAddicts. We're sure that number will increase noticeably with this
mention on marketmambo.

Everyone Needs a SideKick

My apologies dear reader. We began this post inspired by our local pride and self-destructive gluttony, and have wandered into marketing. Such is the habit of our mind, freshly excited by every bird and squirrel like an unleashed dog. This vaunt reminds us of another situation of the recent past, though we admit the connection is unclear at the moment. It's the story of a bride-to-be, Ivanna, her computer geek friend, Evan, and a 16 year old Latina, Sasha, all from the burroughs of New York City.

The bride-to-be Ivanna left her cellular phone, a SideKick, in the back of a Manhattan taxi. This frustrating and disruptive loss was compounded by the fact that the Ivanna had kept her wedding information--dates, guest list--on the device. She asked her computer geek friend, Evan for assistance in its recovery.

Unable to remain wireless-less, Ivanna quickly bought a new SideKick and was suprised to learn that her wireless company had backed up some of her data. Here's where the story takes a modern twist. Among her expected data, Ivanna found new call records and several photos of our young Latina, Sasha, and her friends and family in Corona in Queens. Considering herself fortunate, Sasha, young and modest of means, had taken her new-found treasure through a trial of its features. Sasha had uploaded several of the pictures to her MySpace page, and doing so had made it effortless to learn her email address. When contacted by Ivanna and Evan, Sasha, like any other person of her situation, drew on the tactics that had probably helped her through other conflicts--deception, threat, and avoidance--all with the goal of retaining the phone.

Evan, incensed by the injustice, leapt to action. He created a page, "lostsidekick" on his personal website, evanwashere.com, where he told the story of the errant phone and posted pictures and the exchanges between himself, Ivanna, Sasha, and Sasha's brother, a member of the Military Police, who had come to the aid of his young sister. Evan also posted links to this page on Digg and Gizmodo, a techie blog. Within hours Evan received hundreds of emails from others who shared his outrage. Links to Evan's page were soon on hundreds of other websites. Emails came in from around the world. Some attacked Sasha's MySpace page, a few, overzealous, drove past her home shouting derision.

Eventually the story broke out of the blogosphere and into traditional media. The police, who had been thus far disinterested, arrested Sasha. Her brother was reprimanded by his MP commander. Ivanna recovered her phone. Evan received several offers for freelance PR work.

The Roar of the Unseen Crowd

As we return to where we began, to the pleasure of the Super Bowl and the anticipation of four pounds of pork packing 500 grams of fat, we think of recent news about advertising sponsorship of the game. For all their other, many, faults, Americans have always had a healthy disregard for advertising. It was the Super Bowl that, as the exception, caught America's commercial attention, with these 30 second lavishments receiving almost as much analyisis as the game itself. They were considered the highest expression of the discipline. Yet this week NBC, the host network of the game, was still trying to sell the remaining advertising time. Some may say its the state of the economy, some may say its the state of marketing, another sign that power is moving away from large, centralized control of media and into the hands of those individuals who can manipulate crowds through the tools of the internet.
Posted by Phil Klafta at Saturday, January 31, 2009