In many ways, a significant part of our life is spent in developing a facility with meaning. We learn words and how they correspond with the world, we learn letters and how they compose words, and we learn the importance of context, so that we can discern the difference between "hoarse" and "horse" by the other words that go around them. More subtly, we learn that words mean more than simply their correspondence to the things we see. They accumulate all sorts of connotations and emotions that allow words to become weapons or tools of art. Thus "muscle" is different than "mussel" and "muscle" different than something like "American muscle".
Tio Tito, I hear you say, you've lost us more quickly than usual. Should we excuse ourselves now to avoid a cryptic digression on linguistics, epistemology and semiotics? Fear not, dear readers, and have patience.

This week General Motors, once the Atlas of economic and political muscle, had to finally concede it was now the 98 pound weakling on the beach, and that as unsatisfying as a face full of sand could be, it must sometimes be accepted without protest. In order to receive the federal funds necessary to limp on to its next crisis, GM announced that it is slashing its workforce, its production facilities, slashing its dealership network, all while admitting to the world and to itself that it will at best be a second-tier contender in the future of the auto industry.

And amidst these announcements that are portents of painful personal and community disruption, was another with less real weight but some cultural meaning. GM will discontinue production of it's Pontiac brand.

As we passed through the stage of accumulating the meaning of words to accumulating the meaning of things, one of the first symbols we learned to decipher was that of the automobile. When a man in our neighborhood purchased a Ford Mustang, he immediately became more appealing, though his belly bulged as much as ever. Buy a Dodge Charger and he received a complementary virility makeover, with just a touch of dangerous to flavor the bargain. This could have been done earlier with a brand that ended with "inni" or or even "ati", but this was American sex appeal. No cravats, no silly hats or sillier mustaches, but blue-jeaned, white t-shirted, beef-fed, broad-backed, "Yo Stella" Stanley Kowalski sex appeal. The sex appeal of American muscle, of American muscle cars.

And of all the American muscle cars, none was more broad-backed, etc. than the Pontiac GTO. 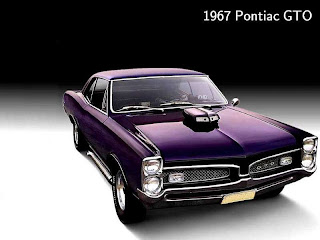 The muscle car era lasted only from, let's say, 1964 to about 1973. No standard definition is accepted, but they typically were mid-sized or larger frames with over-sized engines. They had to seat four or five, anything smaller was a sports car. Some say that the Mustang was too small to be a true muscle car, but we feel this makes the difference about numbers when in this case the numbers don't really matter.

Muscle cars were boxy in overall shape and big across the hips. They were not lithe. Hoods often seemed excessively long. They were not stubby. They were designed to convey one thing: excessive, unnecessary, straight-line speed. Lithe would have conveyed agility, stubby would have shouted stability.

The Pontiac GTO was launched in 1964. with a big engine in a mid-sized Tempest body. Pontiac had a reputation for offering big engines, and had nurtured associations with professional racing. Then in the early '60's GM decreed that it's divisions stop race sponsorship. John DeLorean, then the head engineer at Pontiac, developed the GTO to look as if it was built for street racing. Many at GM thought it wouldn't sell, but it did. Other muscle cars followed.

The muscle car lost popularity in the early 1970's undermined by the OPEC oil embargo, stricter emission standards, and Ralph Nader's pesky insistence that cars have the ability to turn safely at any speed. Passing the econobox era, Americans would once again return to big cars: SUV's, Minivans, and if those weren't big enough, Hummers. This big wasn't sexy big but more stature big, more car as real estate, more big as bloated big, more paunchy than broad-backed.

According to a 2006 Pew survey, 23% of drivers considered their cars "something special", as more than just "transportation". That number is down from 43% in 1991. We don't know how many would have agreed in 1981 or 1971. We could guess. But in 2002, an Atlanta car collector sold his 1971 Plymouth Barracuda for an even million dollars. At the 2006 Barrrett-Jackson car auction a 1970 Chevrolet Chevelle convertible with a 454-cubic-inch V-8, sold for $1.2 million. American muscle cars are growing in value much more than any "atti" or "ini".

Is this the way the Mambos would spend a million dollars? We're confident we'll never know for sure but pretty sure we wouldn't. But price lives somewhere near the intersection of Desire and Scarcity. For many, American muscle cars mean something which is still dear, but otherwise no longer available.

Our broad-backed hero, Stanley Kowalski, lived in this neighborhood, just down the street at the corner of Desire and Elyssian Fields.

While it might of been an understandable connection to take a post about the Pontiac GTO to "Little GTO" by Ronnie and the Daytonas, the Mambo mind is not that linear. We went to a cult film classic from 1971, "Vanishing Point". The hero of that movie, coincidentally also known as Kowalski, is driving his muscle car cross-country, escaping from a society that has given him only disappointment. His car of choice is a Dodge Challenger, not a GTO, but regardless of brand, the movie seemed to capture the then new world of declining American muscle.

Please enjoy the trailer below.