The Fleecing of the Masses

Our cousin, Lola Mambo, recently invited us to a high-end make-up demonstration. We were confident that we were included unintentionally through an errant email click, but still felt the need to decline formally, with regrets of course. Lola was understanding of our response and invited us instead to another social event she was organizing, a Snuggie pub crawl.

The image to the right is not from Lola's soiree. But we do believe it may likely be a dream-fragment from the slumbering mind of the person responsible for Snuggie marketing.

Snuggies have been a contentious topic in the Mambo household since last Fall, when the promise of cutting-edge blanket technology arrived with the change of the season. Most of the family was intrigued by Snuggies, especially our wonderful daughter who has as many words to capture the nuances of blankets as eskimos have for snow. I, Tito, have never been dissatisfied with our current blankets, except for the occasional complaint of too short or too thin, neither of which were uniquely solved by the Snuggie. Besides, the TV advertising which supported the launch depicted cult-like groups of Snugginistas in social settings, each uniformly clad in this blanket with sleeves. Was it merely a coincidence that this product began distribution almost 30 years to the day after the mass suicide at Jonestown?

Don't dismiss the possibility just yet.

The Snuggie campaign has been so successful and the marketing so lauded that one could imagine even this detail had been covered in the marketing plan. The basic strategy for Snuggie-like products (think Sham-Wow!) is to break even in the direct-response television launch and then make the profit with the sales that eventually come from the shelves of retailers. Snuggies have already made a profit through direct, where they sell for $14.99. The sales from retailers such as Walgreens, where the product is listed for $19.99 is just gravy. Since October, over 4 million Snuggies have been sold. Reports are that in some Walgreen's the product is selling out of the stocker's hands, before ever making it to the shelf.

What accounts for the remarkable sales of the Snuggie? Some suggest that it's just the case of a product whose time had come. Maybe while we all have been waiting on the the promise of a better mousetrap, a revolution in blanketry was brewing unnoticed.

Perhaps some of the success can be attributed to good fortune. The Snuggies launch hit the air as other marketers were pulling out of cable tv advertising, leaving a lot of unused time selling at a deep discount. This allowed All-star Marketing Group, the company that markets Snuggies, to buy more and better time than it could have otherwise expected. 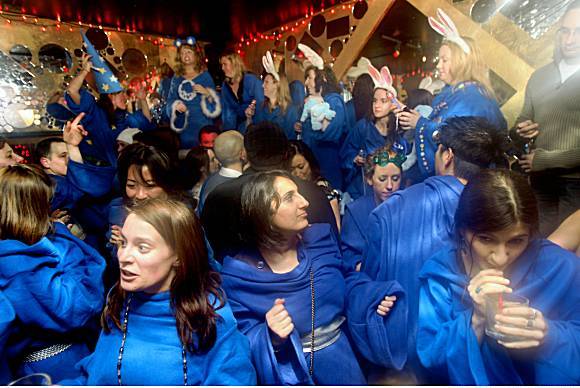 But what about this Snuggie pub crawl? Lola's crawl won't be the first en blanket. SPC's (how often can I write Snuggie pub crawl?) are a nation-wide phenonomenom, or trend, or fad. The accompanying picture is from a recent SPC in San Francisco (thank you to the SF Chronicle). A highlight of the event was the Snuggie fashion show in which contestants were awarded prizes for the most creative modification of their Snuggie. A portion of the proceeds went to charity. An SPC will be held in Chicago on April 18th. We understand that tickets for this event have already sold-out. The Washington, DC SPC was canceled this week because of a lack of organizational support. An SPC may be coming to your town. Those of you considering creating your own be warned: just as the cool of Fall made the Snuggie attractive, the warming of Spring will likely make any trailing SPC's a sweaty, smelly mess.

We have a warm blanket and a story. All we are missing is a hug and a moral to the story. We'll first offer up our attempt at the latter. One moral to this story is that when the God of marketing smiles upon you, consider yourself fortunate and cash the checks quickly. As we mentioned, All-Star Marketing was fortunate to find themselves able to buy tv time at direct-to-you prices. And they were equally fortunate that their advertising was, let's face it, just cheesey enough that the spots and the product became references for easy laughs at the office, and became a prop in a nation-wide goof.

But a more important moral to the story is that in a year when things just aren't selling, after a superbowl that showcased mostly mediocre advertising, the creative that is receiving the most attention is some low-cost drtv. EFFIES are nice, a Cannes Lion is great, but an ad that actually sells may be the greatest award that a creative could have on their reel.

After this post went live we received a note from our sister Lena Mambo and her friend Nick. It included a link to a Gizmodo post that provides a thorough of the Snuggie, the Slanket, and other blanket with sleeves options. If your interested, here's the 'lankie link as Lena calls it:

Of course, here is a link to the tv commercial.

For information on the upcoming Chicago SPC, click here.

For a glimpse at all things Snuggie, click here.

Finally, thank you Miguel for encouragment on this post.