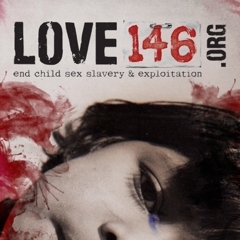 This week saw Ashton Kutcher become the first Twitter user to top one-million followers (why can I no longer say or write those words without the voice of Dr. Evil in my head?). Also, making the rise of Twitter somehow more official, Oprah joined and immediately shut down the service with her celebrity-sized drain on the system's resources.

Lost in all this is the more quiet gesture of Hugh Jackman, who has promised to donate $100,000 to the charity which is the subject of the most compelling Tweet. Mr. Jackman will make his decision tomorrow.

We will send a Tweet in support of Love146, an international group working against the sex trafficking of children. We chose this group not because its mission is more worthy than others; we're sure all are. We are supporting this group because we follow the blog of a company called “Brains on Fire”, which has helped Love146 with its branding and marketing. BoF has asked readers to Tweet Mr. Jackman beginning today at 1:46 et to make the case for Love146. We will do our small part. If you have a Twitter account and the inclination, so can you.

We applaude BoF for their passion for their client that goes beyond revenue. Whatever they are called in the future, the things that used to be called agencies have the power to do well and do good. Relationships like these will make our professional lives more tolerable as other rewards are withdrawn from the business.

It's also interesting to see bloggers or Twitterers use the capital of their social networks to mobilize support for a worthy cause. It makes the often insipid content of tweets and posts seem more like an investment than an indulgence. I, tito mambo, have very few followers on Twitter, but our loving sister Lena demonstrated her generous heart by launching a tweet to hers. Thank you once again Lena.

If you'd like to learn more about Love146 please visit their website. You can also view the short video below.

Finally, if you'd like to visit the BoF blog (which is much more interesting than marketmambo) go to Brains On Fire Blog.

Thanks for adding your voice to help out LOVE146. Every voice counts in ending child sex trafficking and slavery.

And thanks for the kind words about Brains on Fire.

Keep on fightin' the good fight!