More Than Meets the Eye

You auto be in pictures...

Nothing says summer like the big budget blockbusters, and I, Tito Mambo and the little ones—ah, but not so little anymore—have enjoyed each and everyone of them. We've seen Ice Age 3 twice, Harry Potter (Five?) once. And there's the latest Transformers, G-Force this weekend and soon after GI Joe. Has anyone noticed that both Transformers and GI Joe were toys before they were movies? Here's wishing you a Hasbro summer.

One Autobot in particular, Bumble Bee, the spunky younger brother of another Autobot, 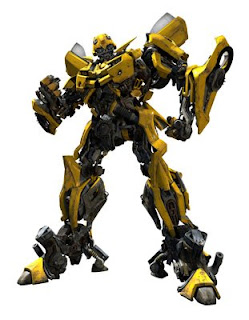 befriends the teenage human hero, Sam. At various times, Bumblebee has been killed, only to be reborn. In the first movie BB can talk, in the most recent he can't. In the comics, Bumble Bee is a Volkswagon, but becomes a Camaro for the big screen. The only constants for Bumblee Bee are his yellow and black coloring, his youthful determination to prove himself, and his ability to protect his human friends from destruction.

Finally Tito, we hear you thinking, a topic we will enjoy: film. Sorry, my friends, but this is the end of the reel. We mention films, in general, and Transformers in particular because of Bumble Bee, especially Bumble Bee the Camaro. It seems that the early part of this summer has also belonged to Camaro, not just Hasbro.

GM, who has seen overall sales drop 40% this year, has a hit car on its hands with the comeback Camaro. For a car that stopped production seven years ago, it is now bringing excitement back to the Chevrolet line and welcome relief to dealers, who have sold about 10,000 Camaros in June alone, and have 13,000 more on back order.

How can a throwback brand like the Camaro bring fresh traffic to show rooms when otherwise only the promise of a $4000 cash for clunkers check is moving buyers from the safety of their sofas? It seems that great brands, the ones that live in the heart, are hard to kill.

The Camaro was born in 1967 as Chevy's answer to the wildly popular Ford Mustang. The brand was in keeping with Chevrolet's inclination to attach names to new models that began with “C”: Corvette, Chevette, Corvair. When reporters asked product managers to explain what exactly was a Camaro, they answered, “a small, vicious animal that eats Mustangs”.

Among those who care about such things, the Camaro is considered more of a Pony car, more of a sports car, than a true muscle car such as the GTO. The first Camaro was based on the compact Nova frame. It sold for a base price of about $2500. A few more dollars got you the big engine and 375 horses of pony-power that made it feel like a full-sized muscle car.

Like muscle cars the Camaro struggled with the onslaught of more stringent emission standards in the early '70's. Sacrificing power for compliance, the 1975 top-end model offered a very practical, very boring, 155 horsepower engine.

The Camaro reclaimed some of it's lost glory in the mid-eighties with the introduction of the IROC model, named after the International Race of Champions. But the car was at its best standing still. With an aesthetic make-over and a middle-aged engine, it looked powerful only when waiting at red lights. Unfortunately the Camaro brand became almost synonymous with IROC, and when the sponsorship of the race was taken over by Dodge in 1990, the Camaro lost even the veneer of authority. Chevy produced the car long enough to fulfill its agreement with the Canadian government which had offered GM attractive tax breaks to host the Camaro plant. In 2002, with the agreement expired and a near obsolete frame design, GM's car czar Bob Lutz announced the brand was to be placed on “hiatus”.

We observed in our last posting that Billy Mays would enjoy a period of immortality, an after-life, as the brands that he pitched worked through their remaining store of produced spots. In reality this is not immortality or after-life, not as one would hope for, as the video images of Mr. Mays provide none of the satisfaction of the real thing to himself or his loved ones.

But are brands burdened by the same corporal constraints as people? Can a brand, a thing of the mind and the heart, return from the distant shore that becomes the final inescapable home of us mortals, who appear in flesh but once? Friends of marketmambo, we had never considered this question, and likely would have assumed that once a brand departs, or is placed on “hiatus”, especially after years of steady decline into irrelevancy, there would be little hope for a fresh incarnation.

One who believes in the rebirth of brands is GM's Bob Lutz, the same man who had euthanized the gracelessly aging Camaro. In 2006, Mr. Lutz began development of a new Camaro concept car, which he nurtured through several versions. In March of this year, the reborn Camaro—officially model year 2010--went into production with a new frame and a new, more efficient assembly plant. 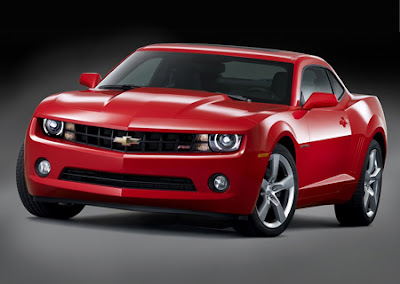 What hasn't been made new is the car itself. In fact, GM found inspiration in earlier models for the new Camaro's style and engine. It's big, almost two-tons of car. The hood is long and low like a traditional muscle car. It's fenders bulge like a tight t-shirt stretched over well-worked biceps. The $31,000 SS model with the V8 engine puts out 426 horses of very impractical power.

Not long ago we wrote about GM's decision to end its Pontiac line. Traditionally, the Pontiac was built with big Detroit engines, American Muscle we called it. The Pontiac GTO did more than any other brand to launch the muscle car era, and the demise of Pontiac was a long-delayed symbol of the era's passing. The Camaro has made its comeback when the preferences of auto shoppers and the business of auto makers aligns with small and practical, when pious Prius drivers savor the smugness of their cultish correctitude, when Chevy waits for salvation from a hero yet to come, the Volt.

Bob Lutz has recently taken over marketing for GM. Does the success of the Camaro suggest a special marketing savvy on the part of Mr. Lutz? So far we have been unimpressed with the efforts, certainly the marketing spend seems unimpressive. Maybe the answer doesn't lie in current marketing. Maybe, like the old tag for the Transformer toys, there's more than meets the eye.

Mr. Lutz seems to understand the power of well-loved brands. A generation of men, maybe two, came of age with the Camaro as their first auto-infatuation. For many, their desire went unfulfilled at the time. But older, wealthier, and as passionate as ever, the Camaro reappears, buff and bulging, among its bulemic siblings.

Also, Mr. Lutz seems to understand that for the Camaro to be successful, the car would need to go beyond aesthetics. The new Camaro offers as powerful an engine as it ever did in its history. The brand had failed as its engine atrophied, it became a name plate without substance to reinforce its heritage. Thank you to Mr. Lutz and GM for actually offering a product that lives up to its name. Most marketers today don't understand their brands value or the link between the brand value and its design.

But perhaps most of all, Mr. Lutz understands then when you follow the herd, all you'll likely see are bovine behinds. There is no greater opportunity than the moment your competition righteously marches off in the same direction, especially when by doing so they've turned their backs on a group of customers who are hesitant to follow.

The Boys of Summer

Twenty-five years ago, “Papa” John Schnatter sold his '72 Camaro to fund his new business, Papa John's Pizza. Schnatter is off on a road trip this summer, in a replica of that Camaro to find the real thing. He's also offering a $25,000 reward for anyone who helps him find it. At the time of this posting, we believe he is in Denver. You can follow his progress at papasroadtrip.com if you like. 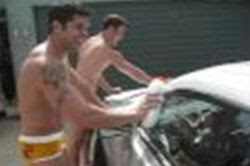 In June, Chevrolet sponsored “Gay Day at the Movies” at the Hollywood Cinema, featuring a preview of the new Transformers movie. The event was supported with youtube videos of “bumble bee boys” clad only in black and yellow speedos washing a new Camaro. Chevy provide the Camaro free of charge for the video. Unfortunately, the video is no longer available. We're not sure if our friends at comicbookqueers.com had any reaction to this, but if not, we extend an invitation to them to post one here.

Finally, Chevy has announced that it will offer a Transformers version of its Camaro. For less than $1000, you can upgrade your purchase to Bumble Bee yellow and black. Chevy appropriately made it's announcement at last week's Comic-Con in San Diego.

We apologize for our inability to provide access to the bumble bee boys washing the new Camaro. Hopefully, we can make up for this. In the mid-eighties, about the same time Chevy introduced the middle-aged IROC, the same time John Schnatter started his business, a mature Don Henley released “The Boys of Summer”. In the song, Henley meditates on the lost passion of his younger days, and more broadly on our sometimes fruitless attempts to recapture this passion.

Out on the road today I saw a deadhead sticker
On a cadillac
A little voice inside my head said, dont
Look back. you can never look back.
I thought I knew what love was,
What did I know?
Those days are gone forever
I should just let them go

Legend has it that this line was inspired by the Grateful Dead sticker on the bumper of the Cadillac hearse owned by Joe Walsh. This may not be true, but it should be.

For those who wish the original, here is the link to the Henley video. But we've embedded below the 2003 version by The Ataris, who changed “deadhead” to “Black Flag” so as to be more relevant to their generation. But like the new Camaro, this version is updated but captures the essence of the original. Please enjoy.