The Fruits of Karma

As inviolable as the law of gravity is the law of karma. Karma is a causal explanation for our lot in life. The idea of karma has a place in all of India's religions. It seems to work for them. As you pass through the cycles of becoming, the samsara, the quality of your deeds determines the form you take when reincarnated. If you're a kind goat herder, you may come back as a holy person. If you're a nasty goat herder, you may come back as the goat.

We at marketmambo believe that karma works not only over lifetimes, but also over shorter periods, such as weeks or days. If bad things happen to you on Wednesday, its probably because you did something bad on Monday. We were not raised in the Jain or Sikh or Hindu faith, but karma is nothing more than the admonition of the Apostle Paul who said "You reap what you sow", but more conveniently packaged in a handy two-syllable word. Hence we subscribe.

Let us explain and perhaps provide an excuse for our early digression on karma.

In mid-July we followed the press coverage of one Matthew Robson, age 15 years and 7 months. Matthew is an intern at the London office of Morgan Stanley who wrote a short research brief entitled "How Teenagers Consume Media". The managers were so impressed with Matthew's brief that they published it. This week we had the time to read the brief and were impressed that something so insightful and thoughtful could have been written by one so young. Matthew's findings are based on his personal observations of the lifestyle of his friends. Science and rigor are absent from the brief, but we don't believe there is a strict correlation between numbers and truth.

We won't be reviewing Matthew's ideas here, but it is worth a read. Please follow this link if you'd like to see the actual three-page report. We'd like to mention one of his findings that drew the press coverage. In the brief Matthew states matter of factly that teenagers don't use twitter.

Most teenagers are heavily active on a combination of social networking sites. Facebook is the most common, with nearly everyone with an internet connection registered and visiting >4 times a week. Facebook is popular as one can interact with friends on a wide scale. On the other hand, teenagers do not use twitter. Most have signed up to the service, but then just leave it as they release (sic) that they are not going to update it (mostly because texting twitter uses up credit, and they would rather text friends with that credit). In addition, they realise that no one is viewing their profile, so their ‘tweets’ are pointless.

The rationale makes sense to us and we have no direct experience which would stir us to argue the position. Others in the press and blogoshere where less accepting because it wasn't substantiated by percent signs and decimal points.

Well now its is. In response to debate caused by the 15 year old's brief, Nielsen has released data from their NetRatings Panel (here) that shows that this teenager is smarter than most adults. According to Nielsen, despite the remarkable growth of twitter, only (here come the percent signs) 16% of twitter users are under 25, though that group as a whole makes up 25% of internet users. For those of you who have some history with media indices, this means that the under 25 group under indexes by 36%. We provide below the chart from Nielsen which shows the growth of twitter across all demographics. 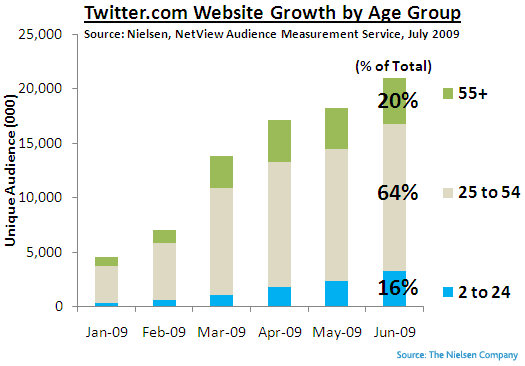 We may take on the possible reason for this unexpected finding in a later post. But for now we offer up this incident to show how easy its is for an adult in a cubicle to dismiss the intelligence and insight that a teenager has about their own life. This is bigotry, ageism, karma.

Yes, karma. Let's call this instance Karma I, for there is another to be mentioned.

We at marketmambo enjoy no smugness about karma's role in this affair because this week karma kept her keen eye on us as well. Careful readers of this blog may recall that in our post on the commercial success of Billy Mays, we facetiously blamed the arrogance and artistic pretenses of ineffective creative directors on the success of John Hughes, the writer/movie director. Sure enough Mr. Hughes also passed away this week (what a summer). The official cause was a heart attack, but for someone who is sensitive to the workings of karma, we can't help but feel that our post may have dislodged the clot that caused the infarction.

We'll label this as Karma II and make no attempt to shirk responsibility.

Let's be clear that we've enjoyed the work of Mr. Hughes from our first viewing of National Lampoon's Vacation. The script was based on Mr. Hughes own recollections of cross country trips he made with his family as a teenager. Hughes built much of his career on sensitively depicting the life and angst of teenagers, as in Ferris Beuller's Day Off and The Breakfast Club, and many teenagers in the audience responded.

We were moved by the recollections of one blogger who was a teen in the mid-eighties. After seeing The Breakfast Club, Alison Byrne Fields wrote the director to tell him of the effect it had on her life. Unexpectedly, the young Ms. Fields and Hughes began a two-year relationship as pen pals. Now the author of the blog We'll Know When We Get There, Ms. Fields writes of her correspondence in the post Sincerely, John Hughes. We recommend that you give it a glance.

We believe that we are very early in our own samsara. We are still in the process of becoming. At any rate we are far from completion. In fact, we wouldn't be surprised if we gained a pair of legs in our next incarnation. Perhaps even two pair. Tell your children to be kind to goats, and just to be safe, flys also.

We need not have such worries for Mr. Hughes. He will enjoy the fruit of his karma. He found a way to connect with people at a very trying time of their lives, and those people still appreciate him to this day. Not bad for an ex-advertising hack.